Why is it we give gifts at Christmas time? The root of Christmas is about a single gift given to the world 2000 years ago, but this gift has largely been forgotten.

The story has become so familiar in our culture that for many it’s lost its meaning entirely. Why do we celebrate the birth of a baby? Who was this baby, and what significance does it have to our lives today?

There is a well-known Christmas passage from the bible which says:

“And she will bring forth a Son, and you shall call His name JESUS, for He will save His people from their sins.”  – Matthew 1:21

This bible verse speaks about Mary giving birth to Jesus, and the reason for which He was to be born.
The difficult part of this verse for many people to understand is the phrase, “He will save His people from their sins”.
A natural question might be, what is sin, and why do we need saving from it?

The definition of sin is “lawlessness”, or in other words, disobeying God’s commands (laws).
The commands of God are so universal that many countries around the world base many of their laws upon them even to this day.
They’re even written on our hearts, our conscience bearing witness to them.

So what are they?

These are all part of God’s moral law. If we’ve broken any of them, we’ve made ourselves enemies of God. Breaking God’s law is called sin and comes with serious consequences. Because God is Holy and Righteous, His punishment is Hell. In fact, He won’t only judge our actions, but our words and thoughts too.

The bible teaches that “the wages of sin is death”. In other words, the reason there is death in the world, and the reason we will all one day die, is because of sin. The payment for our sin, is death. That is what God requires because of our sin.

Many people think that they can make up for their sin by doing good deeds. But once we’ve committed the crime it’s too late. No good judge would release a serial criminal just because they try to do nice things once in a while. After all, the payment God requires for our sin is death, not good deeds.

So how can you escape God’s judgement?

“For God so loved the world that He gave His only begotten Son, that whoever believes in Him should not perish but have everlasting life.”  – John 3:16

This is why the story of Christmas is so powerful, because despite our lost and helpless state, God sent His Son Jesus Christ into the world. He was born of a virgin, and lived a perfect and sinless life. He then gave up His life as a payment for sin when He died on the Cross. He was buried, and three days later He rose from the grave, defeating sin and death.

Remember how the bible teaches that “the wages of sin is death”, well Jesus had never sinned, and yet He died. Why then did He die? Because He was dying for the sin of the world.

Because He was both God and Man, He was able to taste death for everyone. The death and resurrection of Jesus means God can forgive you and grant you everlasting life. WOW, now that is good news. How could Christmas get any better than having forgiveness of sin and peace with God?

To access this forgiveness, God commands you to Repent (turn from sin) and put your Faith (trust) in Jesus Christ alone. Don’t trust in yourself or your own efforts, instead trust only in what Jesus did for you when He died on the cross to pay the penalty for your sin.

And there is salvation in no one else; for there is no other name under heaven that has been given among mankind by which we must be saved. – Act 4:12

For the wages of sin is death, but the gift of God is eternal life in Christ Jesus our Lord. – Romans 6:23

Read the Bible to learn about God. [bible.com] 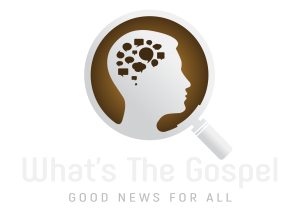 What’s The Gospel is made possible by the generosity of others.

You are welcome to link to this website as a helpful resource.